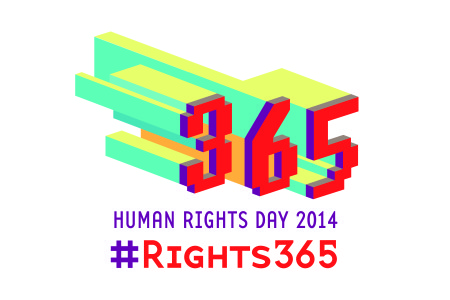 Today, the United Nations marks Human Rights Day 2014, commemorating the date on which the UN General Assembly (UNGA) adopted the Universal Declaration of Human Rights 66 years ago. This year’s slogan, Human Rights 365, acknowledges the idea that every day is Human Rights Day, and everyone, everywhere, at all times is entitled to the full range of human rights.

This year, I join UN Secretary-General Ban Ki-moon in calling on states around the world to “honour their obligation to protect human rights every day of the year” and on people “to hold their governments to account.” I remain hopeful that 2015 will bring opportunities for meaningful cooperation between countries and the UN mechanisms to address ongoing concerns, and particularly to protect those around the world who speak out in defense of human rights. Human Rights Day offers us the opportunity to reaffirm our commitment to the universal principles of human rights set forth more than six decades ago, including the freedom and equality of all before the law; freedom of all from arbitrary arrest and detainment; and freedom of all from torture or other cruel, inhuman, or degrading punishments.

On 31 October, I presented the findings of my latest report on the situation of human rights in the Islamic Republic of Iran to the UNGA’s Third Committee. During my presentation and the  subsequent interactive dialogue, I recognized attempts by the Iranian Government to address international concerns regarding the human rights situation in Iran, but stressed that despite these efforts the situation in the country remains deeply disturbing.

Of particular concern is the situation of human rights defenders and political prisoners in Iran. My report called for the unconditional release of all those detained for the peaceful exercise of their rights to freedom of expression, assembly and association, conscience and political opinion; including journalists, human rights defenders, and adherents of recognized and unrecognized religions.

Despite the release on bail of Ghoncheh Ghavami late last month, many human rights defenders remain imprisoned. At least 35 journalists are currently in detention in Iran and many more continue to allege harassment, interrogations and surveillance, despite authorities’ public pledges to improve freedom of opinion and expression. Further, as of June 2014, at least 300 minority religious practitioners were reportedly imprisoned.