During his time in government, Dr. Shaheed played a leading role in the Maldives democratic transition and in its human rights reform process; a process which saw the country transformed from a thirty year old autocracy with widespread human rights abuses, to a vibrant Muslim democracy with strong human rights safeguards and which, in 2010, became a Member of the United Nations Human Rights Council with a record number of votes.

After joining the Ministry of Foreign Affairs in 1982, Dr. Shaheed rose through the Foreign Service ranks, heading a number of departments including the Bilateral Relations Division, the South Asian Association for Regional Cooperation (SAARC) Division, and the Multilateral Affairs Department. From 1999 to 2004, he held the position of Permanent Secretary. After leaving the Ministry in 2004 to become the Maldives’ first Government Spokesperson at the President’s Office (at the rank of Deputy Minister), Dr. Shaheed returned in July 2005 when he was appointed Minister of Foreign Affairs, a post he held until he resigned in August 2007. Throughout his time at the Ministry and as Chief Government Spokesperson, Dr. Shaheed was a leading advocate of a new modern country founded upon liberal democratic principles, strong human rights protections, and openness and engagement with the outside world. His beliefs led him to become one of the principal architects of the Maldives’ Democratic and Human Rights Reform Agenda, which culminated in late 2008 with the country’s smooth democratic transition under its new 21st Century Constitution.

A strong proponent of robust democratic and human rights safeguards, Minister Shaheed was instrumental in transforming the previous Government’s stand on human rights by securing political approval for the creation of a national Human Rights Commission in August 2003 and accession to the UN Convention against Torture (CAT) in April 2004. In his role as the Chief Government Spokesperson, he also succeeded in reversing the decision of the Government’s Supreme Council for Islamic Affairs to ban the Universal Declaration of Human Rights (UDHR) in July 2005. Later in 2005, Dr. Shaheed was a co-founder of the New Maldives faction within the Cabinet which worked to promote democracy, good governance, and human rights within the Government.

During his first term as Minister from 2005 to 2007, the Maldives acceded to the vast majority of international human rights conventions, including the two Core Covenants, and also ratified the UN Convention against Corruption (CAC). During this time, the Maldives became one of the original signatories of the Optional Protocol to the Convention against Torture (OPCAT), one of the first countries in the world to establish National Preventative Mechanisms, and one of the first to host the international Subcommittee on the Prevention of Torture (SPT). Dr. Shaheed also took the decision to extend a standing invitation to all UN human rights special procedures.

After leaving Office in August 2007, Dr. Shaheed partnered with his former Cabinet colleagues and fellow members of the New Maldives faction, Dr. Mohamed Jameel Ahmed and Dr. Hassan Saeed, and launched the New Maldives Movement and the Maldives Reform Movement. An ardent advocate of democratic change, in September 2008, Minister Shaheed became the running mate of presidential candidate Dr. Hassan Saeed in the country’s first multiparty presidential election. Although campaigning on an independent ticket, Saeed and Shaheed secured nearly 17% of the popular vote, finishing third and thus failing to qualify for the second round. Immediately, Dr. Shaheed and Dr. Saeed pledged their unconditional support to the presidential challenger, Mr. Mohamed Nasheed, and actively supported the Grand Patriotic Coalition which ultimately emerged victorious in the election – ending the thirty-year rule of the former president. Soon afterwards, Dr. Shaheed joined the Maldives Democratic Party (MDP).

During his second spell as Foreign Minister from 2008 to 2010, in the first democratically elected Government of the Maldives, Dr. Shaheed focused considerable attention on consolidating democracy and human rights in the country, and in moving the Maldives from a position of introspection on human rights to a country which has become a leading international advocate of universal rights and freedoms. As part of this process, in 2010 the Maldives was elected to the UN Human Rights Council with a record number of votes. It was the first time the Maldives had been elected to a UN body. Shortly afterwards, a Maldivian candidate was also elected to the UN Subcommittee on the Prevention of Torture (SPT). Dr. Shaheed also led the national consultation process for the Universal Periodic Review (UPR) of the Maldives’ human rights commitments, and led the delegation which presented the Maldives National Report to the UN. In 2010, Dr. Shaheed’s second stint as Foreign Minister ended when he joined the rest of the Cabinet in resigning in protest over corruption among Members of Parliament and a weakening of the separation of powers in the country. His reappointment was then subsequently blocked by the Parliament.

Dr. Shaheed has also been extremely active at the international level. He was a Member of the SAARC Eminent Persons Group from 1997 – 1998, and proposed the adoption of a SAARC Social Charter. He also served as the Maldives Governor to the Common Fund for Commodities from 1999 – 2008. Shaheed also campaigned strongly at the UN to oppose the Maldives’ graduation from the category of Least Developed Countries, which he argued would result in the loss of economic, commercial and financial benefits; and successfully led the negotiations with the European Union (EU) and other donors on the extension of aid and market access to the Maldives beyond graduation at the end of 2010.

Dr. Shaheed has also served as a parliamentarian, as a Presidential Appointee to the People’s Special Majlis (constitutional assembly) from 2004 – 2007, and was active in the founding of the former governing Dhivehi Raiyithunge Party (DRP), but left after accusing it of obstructing the democratic process.

The Human Rights Council appointed Dr. Ahmed Shaheed to the office of Special Rapporteur on the situation of human rights in the Islamic Republic of Iran in June 2011, and he began his mandate on 1 August. Dr. Shaheed is the fourth special rapporteur to Iran, after Andres Aguilar (1984-1986), Reynaldo Galindo Pohl (1984-1986), and Maurice Copithorne (1995-2002).

Dr. Shaheed is also the Chairperson of the Board of the Universal Rights Group, a human rights think tank whose aim is to generate progress towards the full realisation of the rights and freedoms contained in universal human rights instruments.

Dr. Ahmed Shaheed graduated from the University of Wales, Aberystwyth, with a Bachelor’s degree in International Politics and Strategic Studies in 1989, and obtained his PhD in 1995 from the University of Queensland, Brisbane, in the field of International Relations. He is an avid writer and academic, and has presented numerous papers at various international conferences covering topics as diverse as economic development, terrorism, diplomacy, and democracy. 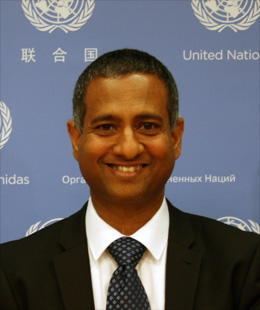