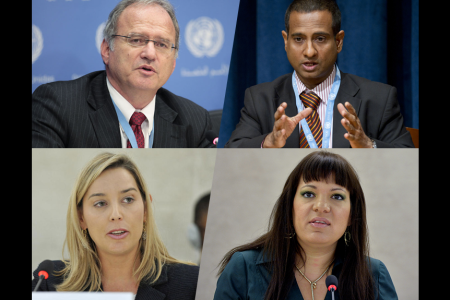 GENEVA (21 May 2014) – A group of United Nations human rights experts* today urged the Iranian authorities to halt the scheduled execution for tomorrow, Thursday 22 May, of two Ahwazi Arab farmers and cultural rights activists, after their death sentences were reportedly upheld by the Iranian Supreme Court.

The UN experts expressed alarm over the case of Ali Chebeishat and Sayed Khaled Mousavi, who were arrested in November 2012 and sentenced to death on charges of Moharebeh (enmity against God) by a Revolutionary Court in September 2013.

Both men have reportedly been subjected to severe mistreatment and beatings, possibly amounting to torture. They have now been held incommunicado for over two months, and neither their lawyer nor family members have been able to obtain official information regarding their current whereabouts or the status of their cases.

The human rights experts expressed further serious concern over reports that the accused were not afforded due process or fair trial standards in accordance with both domestic and international law.

“First and foremost, the Iranian authorities must stop the executions and the accused should be permitted a new, fair trial,” they said. “The authorities must also cease any and all retribution against family members for allegedly speaking with international organizations, including the United Nations.”

“The Iranian authorities must promptly inform Messrs. Chebeishat and Mousavi’s families of their whereabouts, and allow their families and their lawyers’ access to details regarding the status of their cases, in accordance with both international and Iranian law,” the experts stressed.

“The accused were convicted either primarily or solely on the basis of a televised ‘confession’ which appeared on Iranian State TV in June 2013,” the rights experts said, noting with concern that they were apparently not allowed legal representation of their own choosing and were later denied regular access to their court- appointed lawyer.

“The timing of the video release, as well as its content, beg serious questions about its legitimacy as evidence in the conviction and sentencing of these men to the most serious and irreversible fate possible,” they underscored.