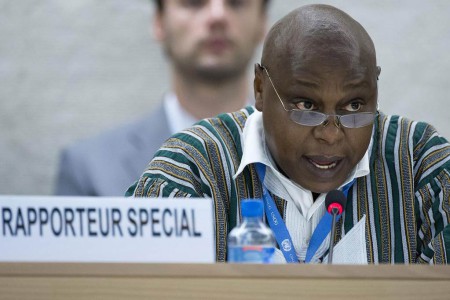 Since 22 May 2014, at least 36 individuals that include journalists, bloggers, filmmakers and authors, many of whom are also human rights activists, have been arrested summoned or sentenced in connection with their journalistic activities or for simply expressing their opinion on social media websites. Some of them have also been charged for ‘gathering and colluding against national security’ following their participation in peaceful assemblies.

“Convicting individuals for expressing their opinion is absolutely unacceptable,” the experts stressed. “Freedom of expression and opinion is necessary for the realization of all human rights, and it is a right reserved for all individuals, even if that individual expresses an opinion with which the Government disagrees.”

A number of these cases include situations where persons are held in solitary confinement or unknown locations and for unknown charges. Many of the trials were allegedly riddled with procedural irregularities, including deprivation of legal representation and exclusion from attending one’s own sentencing.

“The imposition of sentences in conjunction with unfair trial and lack of due process, on charges that do not warrant death or lengthy prison terms, constitutes a dismal violation of international human rights law,” the independent experts noted.

Iranian author Mr. Arzhang Davoodi was recently sentenced to death on the charge of ‘Moharebeh’ (enmity against God), in connection with his alleged membership and support to an Iranian dissident group, an allegation based on a comment he made about the group. Neither he, nor his attorney was reportedly present during the trial.

“It is completely unacceptable that an individual be sentenced to death on charge of Moharebeh for merely speaking one’s opinion,” the UN human rights experts said.

“Not only is this a blatant violation of the International Covenant on Civil and Political Rights, it also breaches the country’s own Islamic Penal Code, which reserves the death penalty only for those who have actively taken up arms.”

The human rights experts stressed that “such extreme convictions are simply intolerable and must be overturned.”

On 22 July 2014, Jason Rezaian, a reporter with the Washington Post, and his wife Yeganeh Salehi, a correspondent for the United Arab Emirates newspaper The National, were arrested, along with an unidentified American-Iranian photo journalist and her husband. Mr. Rezaian and Ms. Salehi are reportedly held in unknown locations.

“These cases exemplify the alarming negative trend taking place in Iran. Individuals and journalists exercising their right to freedom of expression and opinion must be protected, not arrested and prosecuted,” they noted.

“This behavior strengthens our belief that the motive behind these cases is to solely suppress the freedoms protected by national and international law,” they said, stressing that it also goes against the pledges and commitments made by senior Government officials to decrease restrictions on freedom of expression as well as increase the security of the press.

The experts reminded the authorities of their obligations under international human rights law, which guarantees the rights to hold opinions, assemble peacefully and associate freely, without interference.

“We urge the Iranian Government to “immediately and unconditionally release all individuals held in connection with their exercise of freedoms of expression, peaceful assembly and association, and those charged for carrying out their legitimate activities as journalists,” they concluded.