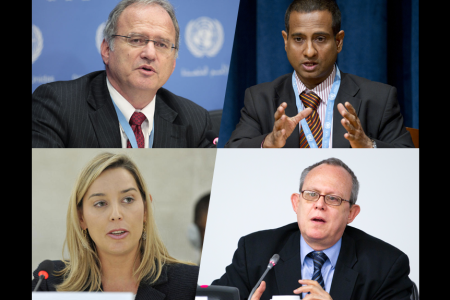 GENEVA (5 June 2014) – A group of United Nations human rights experts* expressed outrage at the execution of political prisoner Gholamreza Khosravi Savadjani on 1 June and urged the Government to put an end to executions once and for all.

Mr. Khosravi was arrested in 2008 and initially sentenced to six years in prison for alleged espionage by a Revolutionary Court. While he was serving his sentence, in 2011, Mr. Khosravi was put on trial again. He was sentenced to death under the charges of Moharabeh (enmity against God) for allegedly sharing information and possibly providing financial assistance to a London-based TV station supposed to be affiliated with the Mujadiheen-e Khalq (MKO) organization.

“The execution of an individual for the alleged offence of transmitting information and providing financial assistance to a dissident organization is simply illegal,” the Special Rapporteur on extrajudicial, summary or arbitrary executions, Christof Heyns, said.

The human rights expert stressed that “the death penalty is an extreme form of punishment and, if used at all, should only be imposed for the most serious crimes, after a fair trial that respects the most stringent due process guarantees as stipulated in international human rights law.”

“Mr. Khosravi’s execution shows the complete disregard of the Iranian judicial system for international fair trial standards and due process guarantees,” the Special Rapporteur on the independence of judges and lawyers, Gabriela Knaul, added.

The experts further noted that the execution of Mr. Khosravi is not only contrary to international human rights law, but is also contrary to the new Islamic Penal Code, which came into force last year and prohibits the use of capital punishment for Moharebeh in cases that do not involve the use of weapons.

“It is beyond comprehension that Mr. Khosravi was tried twice for the same acts and with the same evidence,” said the Special Rapporteur on the situation of human rights in the Islamic Republic of Iran, Ahmed Shaheed. “This is not only contrary to international human rights standards but also Iran’s domestic law.”

Referring to the execution last week of Mah Afrid Amir Khosravi, a former businessman allegedly accused of large-scale financial corruption, the independent expert urged the Iranian authorities to restrict the use of capital punishment and reduce the number of offences for which it may be imposed.

“The fight against corruption by no means justifies the execution of individuals on charges of embezzlement, especially when serious questions about the transparency and fairness of trials remain,” Mr. Shaheed underscored.

The UN experts urged the Government of Iran to put an end to all executions and to institute a moratorium on the death penalty, with a view to abolishing the practice all together.