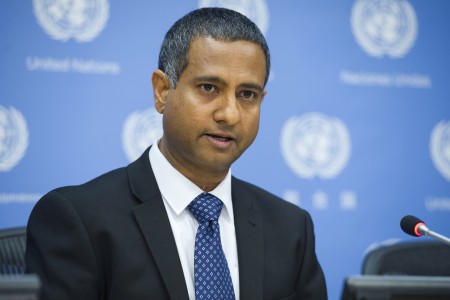 In the weeks following the agreement between the international community and the Islamic Republic of Iran over its nuclear program, many posited that the deal would be beneficial for  the country’s human rights situation.  For many, the agreement represents a more engaging posture for Iran and signals the Iranian government’s willingness not only to gain the international community’s trust and confidence, but to also affirm its commitment to abide by its international legal obligations.  For others, the deal is the first of many steps towards much needed relief from sanctions, which has placed considerable stress on the country’s economy and has given rise to concern about the country’s humanitarian situation.

Tomorrow, I will present my latest report to the Third Committee on the situation of human rights in the Islamic Republic of Iran. This report presents a complex situation that should both provide the international community hope, but that should also give it pause as it considers its next steps towards working with Iran to bring the Government in line with its obligations under the international human rights framework.

My report demonstrates that despite positive efforts made by President Rouhani and his administration to both address certain issues in the country and to more meaningfully engage with the international community, including with my mandate, the human rights situation in Iran remains dire.   My report identifies a range of allegations and developments that Iranian authorities must examine and address in order to comply with their international legal obligations.  This includes laws, policies, and practices that continue to lead to the prosecution of journalists, lawyers, and human rights activists, that discriminate against Iranian women and girls, that marginalize and undermine the rights of religious and ethnic minorities or that impose restrictions on their practices or beliefs.

Of serious alarm is the unprecedented assault on the right to life in Iran. A surge in executions has been observed this past year, despite repeated calls on Iran by the United Nations and the international community to implement a moratorium on the use of the death penalty and re-examine its use. At least 694 individuals were reportedly executed by hanging in the first seven  months of the year, and a number of human rights organizations now report that well over 800 individuals have been executed over the last ten-months.

Less than two weeks ago, Iranian authorities reportedly hanged two juvenile offenders in the span of a few days.  This is notwithstanding an absolute ban on the execution of juvenile offenders under international law.  The two executed prisoners join a long list of other juvenile offenders who have been put to death by Iran’s judiciary in the past few years. And there are dozens more awaiting a similar fate on death row.  The majority of these are executions of non-violent drug offenders, which is also a serious violation of Iran’s international legal obligations.

The troubling state of human rights in Iran today is due, in large part, to a deeply flawed justice system who’s actions violate both international standards and a number of national laws meant to give the accused a fair opportunity to respond to his or her charges, and meant to protect and uphold human security and dignity.

I continue to receive frequent and alarming reports about the use of prolonged solitary and incommunicado confinement, about the use of torture and ill-treatment for the purposes of  soliciting confessions, about a lack of access to lawyers, and about the use coerced confessions during trials. In its response to my recent report, the Iranian government highlighted recent amendments to the new Criminal Procedure Law which provide increased access to legal counsel for those accused of criminal offenses during the investigative phases of the trial. Yet these amendments also impose significant due process restrictions for certain categories of crimes—many of which criminalize the fundamental and peaceful exercise of rights by Iranians.

One of the fundamental rights systematically criminalized by Iran’s judicial system is the right to freedom of expression and opinion. Since the publication of my last report, Iran’s judiciary has issued extremely harsh sentences to individuals that use social media to discuss their views, including those about the Government or the situation of human rights in the country. Some have even received death sentences simply for posting articles on Facebook and other social media sites.

Underpinning these sentences are vague and overly broad laws that continue to restrict speech deemed critical or offensive to government officials and religious figures.  This posture towards expression has resulted in the detention of at least 46 individuals as of April 2015. And although a handful of these journalists have since been released, more stand to face the same circumstances for simply reporting an event, or discussing their views.

The struggle for human rights in Iran is not an abstract fight over political freedoms, but a matter of daily survival.  And now is the time to sharpen the focus on the challenges to realizing the rights of those that still waiting for the agreements that protect their basic rights to be realized.

We must continue to support efforts advanced by President Rouhani and his administration that work to strengthen protections for fundamental rights, and we must encourage ambitions to improve laws and processes that better ensure rule of law.  It is clear, however, that the fundamental reforms necessary to improving the country’s human rights situation cannot take place without the involvement of all branches of government in Iran.

Therefore, it is my sincere hope that Iranian officials come together with the same constructive spirit that resulted in the nuclear agreement, to address the serious rights abuses taking place in the country today.

More from Dr. Shaheed's Work, In The News, Press Releases