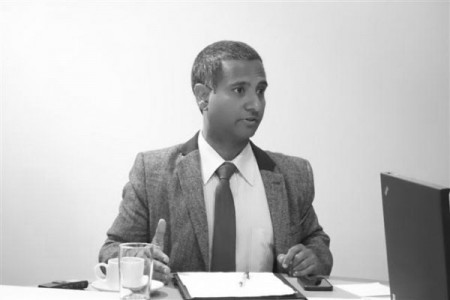 GENEVA (14 April 2014) – The United Nations Special Rapporteur on the situation of human rights in Iran, Ahmed Shaheed, today urged the Islamic Republic of Iran to halt immediately the execution of an Iranian woman, Reyhaneh Jabbari, reported to be scheduled for tomorrow.

Ms Jabbari, an interior designer by profession, was sentenced to death for the alleged murder of Morteza Abdolali Sarbandi, a former employee of the Iranian Intelligence Ministry, in a case that has raised legal concerns.

“The Iranian authorities should review her case and refer it back to court for a re-trial, ensuring that the defendant due process rights guaranteed under both Iranian law and international law,” Mr Shaheed said.

According to reliable sources, Mr. Sarbandi offered to hire Ms. Jabbari on 7 July 2007 to redesign his office. Mr. Sarbandi arranged to take Ms. Jabbari to his office, but instead took her to a residence where he physically and sexually forced himself upon her. Ms. Jabbari reportedly stabbed Mr. Sarbandi in the shoulder in self-defense, fled for safety, and called for an ambulance out of concern for her alleged attacker.

Since her arrest and throughout her prosecution, Ms. Jabbari has maintained that her actions were taken in self-defense, and were aimed at preventing a potential serious assault on her person. She has also alleged being coerced to confess to actions under severe duress.

“Ms. Jabbari’s case raises serious due process concerns, particularly with regard to her interrogation and the reluctance of the court to take into account all relevant circumstantial evidence into its judgment,” the Special Rapporteur said, stressing that her conviction for pre-meditated murder was allegedly based on confessions made under duress possibly amounting to torture.

“Evidence in the case, including the medical examiner’s report highlighting the presence of a tranquilizer in a glass of juice found at the crime scene, possibly intended for use in the immobilization and sexual assault of the defendant, raises serious questions as to whether or not factors eminently relevant to the case were considered in the court’s judgment and sentencing of this young woman,” Mr. Shaheed said.

“If her allegations are true, Ms. Jabbari may have been doubly victimized; first by her attacker, and then by the judicial system, which is supposed to protect victims of intended and actual sexual and physical assault,” the expert stressed. “Sexual violence, often directed against women, must always be fought in all of its forms.”

Mr. Shaheed regretted the spike in executions this year in Iran and renewed his call to the Government to immediately halt them. Over 170 persons including at least two women have been executed since the beginning of 2014 and a large number of prisoners on death row risk imminent execution.

Ahmed Shaheed (the Maldives) is a Visiting Professor at Essex University, UK; a former member of the Maldivian presidential Commission Investigating Corruption; and a foreign policy advisor to the President of the Maldives. Mr Shaheed was Foreign Minister of the Maldives from 2005 to 2007 and from 2008 to 2010. He led the country’s efforts to sign and ratify all nine international human rights Conventions and to implement them in law and practice. He was appointed as the Special Rapporteur on the situation of human rights in Iran in June 2011 by the UN Human Rights Council. As Special Rapporteur, he is independent from any government or organization and serves in his individual capacity.