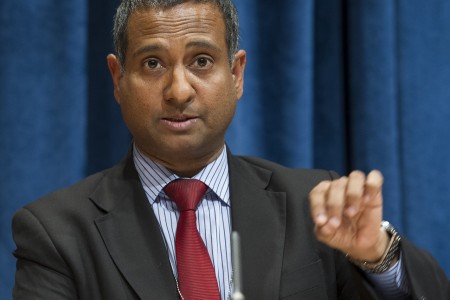 5 February 2013 – A group of United Nations independent experts have called on Iran to immediately release journalists detained in recent weeks, as well as to stop what it says is a broader campaign to crack down on media ahead of the June 2013 presidential elections.

“The recent wave of arrests of journalists solely for carrying out their professional activities is a flagrant violation of Iran’s obligations under international human rights law,” the experts said in a news release.

Security forces last week raided five newspaper offices and arrested at least 17 journalists, the majority of whom work for independent news outlets. Some of the journalists were accused of collaborating with ‘anti-revolutionary’ foreign media outlets and human rights organizations.

“The right to communicate with international organizations, including non-governmental ones, is a fundamental aspect of freedom of expression, and using such accusations to conduct mass arrests flies in the face of Iran’s international human rights obligations,” the experts said.

They added that journalists must be able to speak and write without fear of persecution, arrest and intimidation, and called “disturbing” the use of mass arrests and detentions as tools to retaliate against the freedom of speech.

Before the latest arrests, more than 40 other journalists were already imprisoned in Iran.

In addition, the experts last week urged the release of five activists belonging to the Ahwazi Arab minority, saying it was “absolutely unacceptable for individuals to be imprisoned and condemned to death for exercising their rights to freedom of peaceful assembly, association, opinion and expression.”

Iran is preparing for presidential elections scheduled in June. The group of experts warned that the recent arrests of journalists “may serve to reinforce self-censorship and severely constrict freedom of opinion and expression at a key moment in Iran’s political development.”

Independent experts, or special rapporteurs, are appointed by the UN Human Rights Council to examine and report back on a country situation or a specific human rights theme. The positions are honorary and the experts are not UN staff, nor are they paid for their work.