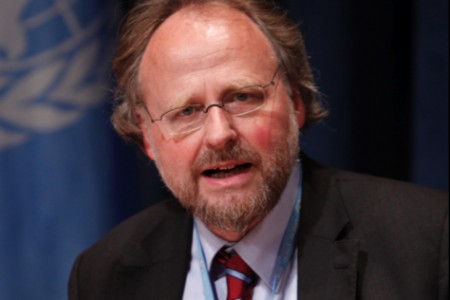 GENEVA (20 September 2012) – The United Nations Special Rapporteurs on the situation of human rights in the Islamic Republic of Iran, Ahmed Shaheed, and freedom of religion or belief, Heiner Bielefeldt, welcomed the release of a Christian Pastor charged with apostasy, but expressed deep concern over the arrest and detention of hundreds of Christians over the past few years. They called on the authorities to “ease the current climate of fear in which many churches operate, especially protestant evangelical houses of worship.”

The Special Rapporteur on Iran welcomed the acquittal and subsequent release from prison earlier this month of Pastor Youcef Nadarkhani, who spent three years in prison for charges that, in his view, do not qualify as offences in Iran’s current Penal Code.

“The Iranian judiciary is to be commended for its decision to release Pastor Nadarkhani,” the human rights expert said. “However, questions remain as to why he spent three years in prison apparently for practicing his religion, a right guaranteed in the Iran’s own Constitution and in the International Covenant on Civil and Political Rights,” which the country ratified in 1975.

Born to Muslim parents, Mr. Nadarkhani converted to Christianity at the age of 19 and became a member of a Protestant church in Rasht. He was arrested in October 2009 on charges of apostasy. In September 2010, he was found guilty and sentenced to death on charges of apostasy and evangelism, following a trial in which the guarantees of due process of law had not been properly applied, according to the Special Rapporteur.

The sentence was upheld by the Supreme Court, with the caveat that unless the accused renounced Christianity, he would be executed by hanging. In early September 2012, Iranian judicial authorities reduced Pastor Nadarkhani’s charge to ‘evangelizing Muslims,’ and his sentence to three years, which he was credited with having already served.

Based on his own interviews and reports from various NGOs, Mr. Shaheed estimates that over 300 Christians have been arbitrarily arrested and detained throughout the country since June 2010, and that at least 41 individuals were detained for periods ranging from one month to over a year, sometimes without official charges.

“Scores of other Christians appear to remain in detention for freely practicing their religion,” the independent expert said, noting that “churches continue to report undue pressure to report membership, in what appears to be an effort to pressure and sometimes even detain converts, despite articles 13, 14, and 26 of the Iranian Constitution which protect the rights of Christians and others.”

For the Special Rapporteur on freedom of religion, “Iran possesses the basic legal framework to guarantee Christians, as a group, the right to freedom of religion, and should ensure that this right is granted in practice as well.” Mr. Bielefeldt noted that “the right to conversion in this context is an inseparable part of freedom of religion or belief as enshrined in the Universal Declaration of Human Rights and the International Covenant on Civil and Political Rights.”

The Special Rapporteur on Iran stressed that the arrest and prosecution of individuals for religious affiliation runs counter to the protection of minority religions in Iran’s Constitution and constitutes a violation of Iran’s obligations under the International Covenant, in particular to respect freedom of religion and belief and freedom of expression and association.

The Special Rapporteur on freedom of religion also called for the protection of other religious minorities such as the Baha’is, Yarsanis, Dervishes and other religions, faiths or beliefs not recognised by the Iranian Constitution.

In his reports* to the UN General Assembly and to the UN Human Rights Council, Mr. Shaheed has expressed serious concern over alleged human rights violations against Christians, Baha’is and other religious minorities in Iran.