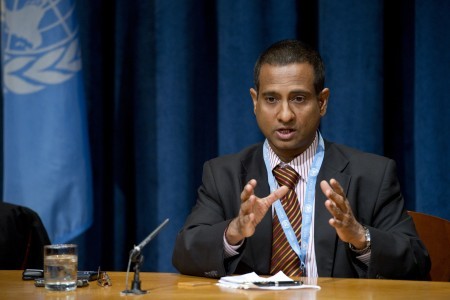 Iran has launched a sophisticated smear campaign against the UN special rapporteur investigating its human rights violations by widely spreading a fabricated WikiLeaks cable purporting to show he received bribes from Saudi Arabia.

In a concerted effort aimed at discrediting Ahmed Shaheed in the eyes of the general public, Iranian state-run agencies and semi-official websites simultaneously carried articles claiming that the Saudi embassy in Kuwait had paid the UN envoy $1m to take an anti-Iran position. It dominated many Iranian front pages on Tuesday and an Iranian official later used the false information to question Shaheed’s credibility.

The allegations are based on what is claimed to be a WikiLeaks cable the authenticity of which has been challenged by the organisation itself. “Please show which cable this claim is based on. You fail to link to one of our cables in the article,” the official account of the WikiLeaks tweeted in response to a website carrying the news. Shaheed has also strongly denied the claims.

A deeper examination of the forged document when compared with genuine Saudi cables published on the WikiLeaks website showed that it had been fabricated with help from a computer technique to merge two sets of different real diplomatic Saudi letterheads and creating an entirely new letterhead which does not exist elsewhere. It was then put on alwaienews.com and awdnews.com, two amateur websites that duplicate materials from other sources.

The apparently orchestrated campaign against Shaheed seems to fit into a familiar pattern of Iran smearing activists, dissidents, or even journalists by propagating misinformation about them. In a similar tactic used in 2013, a number of staff members at the BBC’s Persian service, which is loathed by the Iranian establishment, were falsely accused of sexual misconduct and were the victims of online identity theft designed to discredit them.

The timing of the recent campaign against Shaheed is also curious. It comes at the time when the WikiLeaks have released cables written by Saudi diplomatic missions across the world, showing an obsession on their behalf towards their regional rival, Tehran.

One of those cables incidentally revealed that Saudi Arabia had given a bursary, worth thousands of pounds, to the son of a former Iranian reformist minister, Ataollah Mohajerani, who currently lives in exile in London. Mohajerani is yet to react to the cable but it brought much embarrassment for the Iranian opposition which had the reformist politician on its side. Iran used the cable as evidence that the Iranian opposition is under the influence of the Saudis, which Tehran is increasingly viewing as its new enemy.

Against the backdrop of that real WikiLeaks cable about Mohajerani, Iran appears to have seized an opportunity to intentionally make similar allegations, albeit this time untrue, directed at Shaheed. Alwaienews was used by Iran’s state television and other agencies as the main source of their reports about Shaheed.

On Wednesday, Mohammad-Javad Larijani, the head of Iran’s state-run high council for human rights, treated the bogus allegations against Shaheed as fact and said it was not a coincidence Shaheed and Mohajerani are based in London. But he later denied making those comments which were reported by a number of semi-official news agencies, including Isna and Fars.

“Iran is the biggest democracy in the region,” Larijani was quoted as saying. “In some of our neighbouring countries women are not allowed to drive [referring to Saudi Arabia]. People get shot in the street for voting but because these countries are western allies, no one picks on their human rights record.” News agencies which carried Larijani’s comments later removed the entire interview from their websites and published his subsequent denial.

Shaheed, a former foreign minister of the Maldives, follows rights violations in Iran closely and has submitted a number of damning reports to the UN, documenting widespread and systematic violations in the country, especially its use of the death penalty and arbitrary arrests of peaceful activists.

Iran has repeatedly condemned Shaheed’s reports as unsubstantiated, biased and collated from anti-Iranian outlets and terrorist groups. Shaheed has never been allowed to travel to Iran since his initial mandate was approved by the UN in 2011. He recently joined other human rights activists in calling on Iran’s president, Hassan Rouhani, to follow his nuclear deal success with human rights progress.

Hadi Ghaemi of the New York-based international campaign for human rights in Iran (ICHRI) said the recent claims against Shaheed were a continuation of a longstanding campaign by Iranian officials to discredit both his work and his personality.

“The attacks against Shaheed are nothing new: Iranian officials and hardline media outlets have been trying for years to defame Shaheed and destroy the credibility of his work,” he told the Guardian. “With the nuclear accord reached, demands for political and social reforms in Iran are expected to increase. Hardliners want to pre-empt increased momentum for reforms. Trashing the special rapporteur, whose work is internationally lauded – and who has explicitly called for a renewed focus on human rights now that the deal has been reached – is one way to do this.”

Ghaemi said the smear campaign was an attempt to deflect attention from Iran’s “egregious” human rights record. “By discrediting Shaheed and his work, the authorities seek to influence public opinion in Iran,” he said. “The current allegations are a blatant attempt to garner domestic support for their refusal to cooperate with the special rapporteur, and to create supposed ‘facts on the ground’ that support their vilification of Shaheed.”

Mani Mostofi of the Impact Iran group, which works to draw attention to human rights in the Islamic Republic, said: “Conveniently, WikiLeaks is a fully searchable archive. A simple search for Ahmed Shaheed or other keywords produces zero documents to support these absurd claims. Nothing. Given this story is so easy to verify or disprove, you’ve got to wonder why an Iranian state media outlets would rush to publish something so baseless on their front pages.”