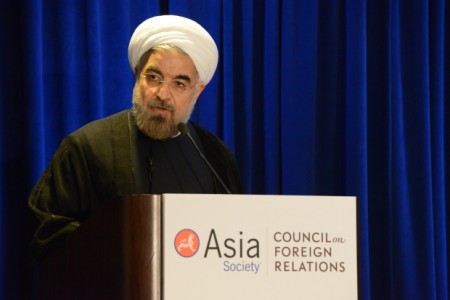 A U.N. report published in late October has criticized Iran’s recent human rights record. Compiled by Ahmed Shaheed, the U.N.’s Special Rapporteur for human rights in the Islamic Republic, the report focuses on executions and violations of freedom of expression.

While President Rouhani has offered no reaction to the report, others within the Iranian government have decried what they see as an irrevocable bias.

As Marzieh Afkham, spokeswoman for Iran’s Foreign Ministry explained, the report “describes the human rights situation in Iran in a completely unfair light and with political motivations.”

Is the report unfair and political, or does it accurately assess how far Iran lies from meeting international human rights obligations?

Executions and limits on freedom of expression

Shaheed’s report claims that tensions between Iran’s “laws and its human rights obligations, along with the capricious application of those laws, remain the causes of the lack of progress.” The report highlights violations of freedom of expression and summary executions with particular concern.

According to the report, specific “Iranian laws and policies… continue to flagrantly violate the right of freedom of expression and access to information under international law.” Most of these violations have occurred in the context of the Internet and new media.

The report claims that in July 2013, 67 Internet cafes were shut down throughout Iran. Iranian authorities claimed that these cafes allowed the use of “immoral computer games” and the collection of “obscene photographs .” Internet cafes have blossomed in Tehran and other Iranian cities in the past few years and have become a crucial space for information sharing in Iran.

The report suggests that Iranian laws, “Including the 1986 Press Law, the 2009 Computer Crimes Law and the 2010 Cybercrime Law,” have facilitated these abuses and have violated international norms for freedom of expression and access to information. Together, these acts specify a range of topics that internet press is not allowed to report on and gives the government the power to restrict access to information along the loosely defined lines of national security and the maintenance of Islamic morality.

As the U.N. report explains, Iran’s government has defended its restrictive laws and policies by contending that they are based on “their conformity with Islamic standards,” and were established “through a democratic process.”

Whether or not this is the case, the report claims that the laws and policies fail to meet international standards. “Restrictions on the freedom of expression must be unambiguous, narrow and coupled with adequate safeguards against abuse,” Shaheed explained.

The U.N. report also noted with “particular alarm” recent trends in the practice of execution throughout the Islamic Republic of Iran, including, “secret executions at Vakilabad prison in Mashhad,” and “the summary executions of Afghan citizens who attempt to illegally cross into [Iran].”

The report explains that the majority of the 724 executions that took place in Iran between January 2012 and June 2013 were related to drug trafficking. While the government maintains their right to decide punishments for crimes that occur within Iran’s borders, Shaheed argued, “The international consensus is that (drug trafficking) does not constitute a capital crime.” But executions related to trafficking are only part of the problem.

Just days after the report was released, Iran executed 16 people in retaliation for an attack on border guards posted along the Iran-Pakistan border. As Human Rights Watch’s Sarah Leah Whitson asked, “What kind of justice system hangs 16 prisoners ‘in response’ to a recent killing of security officials, with no indication that they had anything to do with these crimes.”

Human Rights Watch and Amnesty International have echoed Special Rapporteur Shaheed’s calls for a moratorium on executions in Iran.

While the report called special attention to violations of freedom of expression and executions, it also discusses systematic obstacles to women’s rights, the administration of justice, and freedom of religion.

Iranian officials have hardly accepted the document at face value. While the world awaits Rouhani’s response, many other voices have filled the void and called the investigation shoddy and politically motivated.

Marzieh Afkham, the spokeswoman for Iran’s Foreign Ministry, has questioned the report’s sources. In a statement for the Ministry she accused Shaheed of relying on “Terrorist groups…which are seeking violence and have innocent people’s blood on their hands” to support his claims. The sources, she claims, have robbed the report of “legitimacy and legality.”

Shaheed has not been allowed to visit Iran since his appointment as Special Rapporteur, and so, he has relied on around 137 interviews submitted to different human rights organizations to substantiate his claims.

Afkham addressed Iran’s reluctance to comply with Shaheed. She explained, “Iran considers the appointment of a special human rights rapporteur as an insult to the great Iranian nation, and thus does not recognize it.”

As President Rouhani mentioned in a speech to parliament after his oath of office, “The only way for interaction with Iran is a dialogue on an equal footing, confidence-building and mutual respect…If you want the right response, don’t speak with Iran in the language of sanctions, speak in the language of respect.”

Alongside these appeals for a more respectful dialogue, Rouhani made a number of promises before his election on the issue of human rights. For instance, Rouhani said that he planned to issue a “civil rights charter” that would establish equality between all Iranian citizens regardless of gender, race or religion.

As of yet no such charter has been produced. Still, a recent U.N. draft resolution has applauded Rouhani’s plans while encouraging “concrete action to ensure these pledges can result in demonstrable improvements as soon as possible.”

The report also warns the international community of the unintended consequences of its economic sanctions. While the employment of sanctions can help coerce Iran into conforming to international norms, properly employed exemptions are crucial to ensuring that these sanctions do not harm the development of human rights.
Specifically, the report explains that humanitarian exemptions have failed to protect Iranians against higher prices for basic commodities and restricted access to lifesaving health care.

Shaheed has reflected this optimism and applauded President Rouhani’s “positive signals,” arguing that they “raise the expectation of tangible and sustainable reforms.”
Others, including Iranian Nobel Laureate Shirin Ebadi, have remained sceptical of Rouhani’s commitment to human rights reform.

In an interview with the Associated Press, Ebadi explained that while Rouhani has a reputation as a reformer and moderate, so far “we get nothing but bad signals” from the new government when it comes to human rights.

While Shaheed and Ebadi both speak vaguely about “signals,” the report is a concrete definition of the state of human rights in the Islamic Republic.

In light of this report, how will human rights impact international politics?

The United States has entered fresh negotiations with Iran regarding its nuclear program. According to Secretary of State John Kerry, the U.S. has “the best chance we’ve had in decades, we believe, to halt progress and roll back Iran’s program.”

Iran’s human rights record might play a substantial role in this new dialogue.