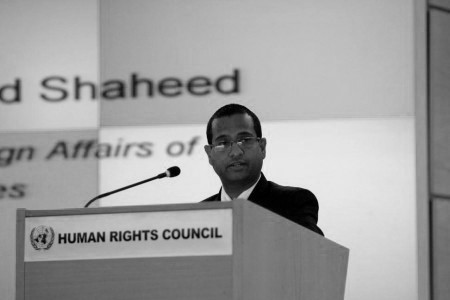 On March 17, Dr. Shaheed presented his sixth report to the 25th Session of the United Nations Human Rights Council on the situation of human rights in the Islamic Republic of Iran. Shaheed’s speech was followed by an interactive dialogue with the Iranian government and Council member states.

Watch the video of Dr. Shaheed’s statement to the UN Human Rights Council from earlier today. The text of the statement is below Iran’s statement.

Iran’s statement before the UN Human Rights Council, view below.

The dialogue on the situation of human rights in Iran has ended.

—————
Statement by Dr. Ahmed Shaheed
UN Special Rapporteur on the situation of human rights in Iran
At the 25th session of the United Nations Human Rights Council in Geneva

As with other international mechanisms, the Council’s Special Procedures are most effective when all stakeholders work together to promote and protect human rights through cooperation and constructive dialogue.

Throughout my mandate, I have repeatedly expressed my willingness to work with the government and people of the Islamic Republic of Iran to enhance the promotion and protection of civil, political, economic, social and cultural rights — including the right to development. And I have made clear to the Iranian authorities that I remain at their disposal to hear their concerns, to discuss the challenges they face with an open mind, and to work with them to address these challenges in order to strengthen the enjoyment of human rights for all Iranians, without distinction.

This means, of course, having the opportunity to sit down and talk with representatives of the Islamic Republic. In this sense, I am pleased to report that over the past twelve months — both in Geneva and New York — I have been able to hold several general conversations with Iranian officials on a range of important human rights issues raised in my reports, including the one before you. Iran has also responded to 4 of the 25 communications forwarded this year about specific cases and perturbing trends, and I also received a detailed response to the report before the Council today.

We may not agree on certain key points, but I nevertheless welcome this dialogue and value the exchange of information and perspectives.

Unfortunately, despite these useful exchanges, I must report that I have still not been allowed to visit the country. This remains truly disappointing, because reaching out beyond the meeting halls of Geneva and New York; to visit countries, meet with government officials, NGOs, and the victims of human rights violations remain an important tool for the Special Procedures.

In addition to allowing for an on-the-ground assessment of the human rights situation, these visits also allow Special Rapporteurs to strengthen and deepen dialogue with government officials and other key parts of the domestic body politic, including the police, the judiciary, the parliament, national human rights bodies, and the press. Through such dialogue, a better sense of domestic challenges can be gleaned and trust built – to the benefit of all sides.

I therefore once again urge the Iranian authorities to facilitate my request for a country visit.

The report before you documents developments in the human rights situation of the Islamic Republic since the submission of my interim report to the General Assembly last October, including a number of positive overtures apparently aimed at advancing President Rouhani’s campaign pledges to strengthen human rights protections and at remedying some cases of human rights violations.

While welcoming these announcements and steps, and the generally positive messages emanating from the new administration, I note that hundreds of individuals reportedly remain in some form of confinement for exercising their fundamental rights; including some 39 journalists and bloggers, 92 human rights defenders, 179 Baha’i, 98 Sunni Muslims, 49 Christians, and 14 Dervish Muslims. It is also distressing that the leaders of the Green Movement, Mr Mir Hussain Mosavi and Mr Mehdi Keroubi remain in detention after three years in the absence of charges.

Interpreting article 9 of the International Covenant on Civil and Political Rights (ICCPR), the Human Rights Committee declared that “liberty of the person is a right of profound importance…both for its own sake, and because deprivation of liberty has historically been a principal means by which other human rights are suppressed”.

As such, the report before the Council demonstrates that the rhetoric and modest steps taken to date are yet to translate into the kinds of deep reforms needed to respond to the human rights concerns raised by the General Assembly, the Human Rights Council, the UN Secretary-General, Treaty Bodies, all Special Procedures, human rights defenders and international organizations.

The current draft of the citizen’s rights charter, for example, takes a step in the right direction in promulgating rights already guaranteed under Iranian law, but falls short of strengthening protections for the equal enjoyment of human rights for women and members of the country’s religious and ethnic minority communities. It also fails to address the use of cruel, inhumane or degrading punishment, including flogging, hanging, stoning and amputation. The charter does not ban the execution of juveniles and also fails to address concerns about the use of capital punishment, in particular for offenses that do not meet the standard for most serious crimes under international law.

These concerns are further compounded by reports, which signal the persistence of malfunctions in the administration of justice, which is the focus of the report before you, including due process of law, abuse of solitary confinement, and the failure to take into account the principle of proportionality in passing sentence, as documented by the Working Group on Arbitrary Detention during its visit to the country in 2003.

On Friday I had the distinct pleasure of meeting with His Excellency the Permanent Representative of Iran, along with a delegation of distinguished Iranian judicial, legal, and diplomatic experts and officials to discuss issues raised in the current report. During our discussion, members of the delegation identified several comprehensive documents that strictly govern the judiciary and the judicial process itself, and maintained that in general these documents have aimed to reform the system away from retributive justice and toward rehabilitation over the past ten years.

In the same vein, they assured me that judicial officials do not “desire” to implement the death penalty, but that rather extreme cases and circumstances sometimes necessitate such harsh treatment, only after significant judicial review and the exploration of alternative penal possibilities.

While I very much appreciate the delegation’s assurances, this reply brings into even sharper focus the practical concerns I have outlined in my report: namely, that despite the existence of laws and provisions, in practice these laws are seemingly flouted by individuals and groups with impunity.

In order to progress, we must admit that despite existing laws or policies, violations are occurring. And while I can appreciate the possibility that death sentences may not be the first choice of punishment for judges, the fact remains that execution for drug-related crimes is illegal under international law, and that other capital crime cases have raised alarm over the possibility that due process rights were not guaranteed prior to or following the implementation of the sentence. For example, in January 2014 two founding members of the Al-Hiwar cultural institute, Hashem Shabani and Hadi Rashedi, were apparently executed without prior notice, their bodies have reportedly still not been returned to their families, and families have been reportedly prohibited from publicly mourning their deaths. Mr Shabani, Rashedi, and three other founding members were sentenced to death in 2012 despite claims from the accused that their early confessions were extracted under torture. Three individuals from the group remain on death row. I have publicly raised my concerns about executions, along with other Special Procedures and the High Commissioner, in recent weeks, and continue for these reasons to call for a moratorium on the death penalty in Iran.

I fully realize that real and lasting change takes time, and that turning around the situation of human rights in a country cannot happen overnight. It is therefore important, in order to build trust and momentum, that stakeholders take concrete steps, even if they are incremental.
By maintaining a strong, open and cooperative dialogue with the Iranian authorities, I am better able to work with them to understand the nature of allegations made, to assess their veracity, and where appropriate, highlight remedy and identify opportunities for redress. Likewise, by visiting the country to talk to victims and to discuss human rights with all stakeholders, I would be in a better position to support Iran’s domestic efforts to strengthen human rights, through, for example facilitating technical cooperation, identifying capacity-building requirements, and through mobilizing international assistance.

This delicate relationship between constructive dialogue, cooperation, and addressing violations, is brought into even sharper focus during times of human rights reform.

Therefore, we must remain steadfast in our encouragement of the recent deepening of Iran’s engagement with the international community, which presents numerous opportunities for future cooperation, especially with regard to capacity building to advance the country’s international human rights obligations.

We must also continue to send a message to every single Iranian whose rights have been violated that the international community is aware, that it cares, and that it will continue to take steps, in cooperation with the Iranian authorities to address those violations. We must continue to work together to bridge the gulf between international commitments and implementation, between doing and saying. Not doing so leaves so many of us tragically divided against ourselves, and against those universal values all of us in this room have pledged to preserve and advance for all.