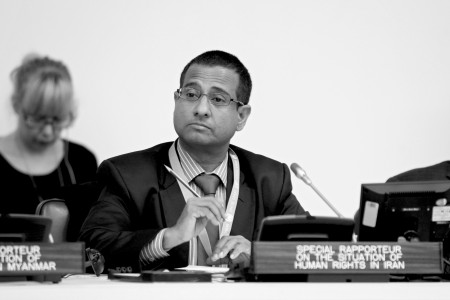 GENEVA (11 February 2013) – On the second anniversary of the house arrest, the Special Rapporteur on the situation of human rights in Iran, the Special Rapporteur on the rights to freedom of peaceful assembly and of association and the Chair-Rapporteur of the Working Group on Arbitrary Detention called for the immediate release of two key opposition leaders in Iran, Mir Hossein Mousavi and Mehdi Karoubi and their family members.

The Special Rapporteurs also expressed concerns about the detention of two daughters of Mr Mossavi, Ms Zahra Mossavi and Ms Nargis Mossavi, who were reportedly detained today after speaking out against their parents’ house arrest.

“I urge the Iranian government to immediately and unconditionally release the two opposition leaders and their family members, and to end all restrictions on their movement and legally protected activities,” said Ahmed Shaheed, Special Rapporteur on the situation of human rights in Iran.

Former presidential candidates Mehdi Karoubi and Mir Hossein Mossavi, along with his wife Zahra Rahnavard, have been kept largely “incommunicado” in their homes since February 2011. Two years ago, they were detained after staging a rally in solidarity with protesters in Egypt, for which they had sought permission from the authorities.

“As a party to the International Covenant on Civil and Political Rights (ICCPR), the Iranian government is obliged to protect the civil liberties of all its citizens, including the rights to be protected against arbitrary detention (Article 9), to be informed of any charges against them, to be given access to legal counsel, and to face an independent and impartial tribunal”, said Mr. Shaheed.

On 29 August 2012, the Working Group on Arbitrary Detention adopted an Opinion on this case, finding the detention to be arbitrary. “None of these people have been charged with a crime since their arrest, or have been brought before a judge to contest the legality of their detention, said El Hadji Malick Sow, Chair-Rapporteur of the Working Group. “This is in violation of Iran’s international obligations and national laws, which provide that no one shall be subjected to arbitrary arrest or detention.”

The UN Special Rapporteur on the rights to freedom of peaceful assembly and of association, Maina Kiai, once again reminded the Iranian authorities of their international obligations to protect the rights to freedom of peaceful assembly, association and expression. “Such rights are essential components of democracy and are all the more relevant in the context of Iran’s upcoming presidential elections, to be held next June. It is of the utmost importance that members of civil society, including the media and human rights defenders, as well as political activists, be given greater space to avail themselves of these rights”, Mr. Kiai added.

In this regard, the Special Rapporteurs also urged the Government of Iran to release hundreds of other prisoners of conscience who remain in prison for peacefully exercising their rights to freedom of opinion and expression, or freedom of association and assembly.

“I call on the Government to facilitate a transparent and open environment for the election by releasing opposition leaders and allowing the media to effectively and independently report, without being harassed, threatened or arrested. Continued restrictions of this kind will undermine the inclusiveness and fairness of the future presidential elections,” concluded Mr. Shaheed.