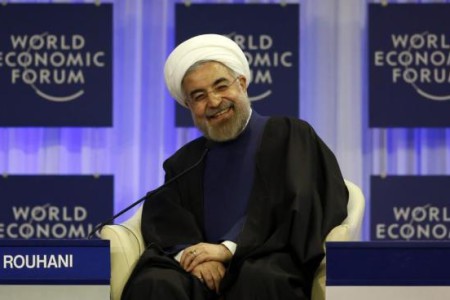 Reuters, 11 March 2014 – Iranian President Hassan Rouhani has failed to fulfil campaign promises to allow greater freedom of expression and there has been a sharp rise in executions since his election, U.N. Secretary-General Ban Ki-moon said on Tuesday.

Rouhani, who won a landslide in June, led Iran to an initial nuclear deal with world powers. But, perhaps wary of further antagonising powerful hardliners, he has not made significant reforms at home that moderate voters had hoped for.

In a report to the U.N. Human Rights Council, Ban highlighted the prevalent use of capital punishment in Iran and called for the release of activists, lawyers and journalists as well as political prisoners that he said were in custody for exercising their rights to free speech and assembly.

“The new administration has not made any significant improvement in the promotion and protection of freedom of expression and opinion, despite pledges made by the president during his campaign and after his swearing in,” Ban said.

“Both offline and online (news) outlets continue to face restrictions including closure,” he said.

Ban welcomed the release of 80 political prisoners since September, including human rights lawyer Nasrin Sotoudeh, and the reinstatement of some university students and lecturers.

But he said there was a “large number of political prisoners”, including lawyers, women rights activists and journalists.

Ban highlighted the fact that Mehdi Karoubi and Mirhossein Mousavi, presidential candidates in 2009, have been under house arrest since 2011, despite never being charged with a crime.

“The Secretary-General urges the President to consider the immediate release of the two opposition leaders and to facilitate their urgent and adequate access to medical care.”

Soltani led a hunger strike last November protesting the denial of external medical care for some prisoners, he said.

Thirty-five journalists were held in Iranian prisons as of December and 16 Internet activists were arrested that month on charges of providing contents and developing websites for foreign elements, Ban’s report said.

“Some of those arrested were reportedly the administrators of popular cultural and social pages on Facebook,” it said.

Ban said that most executions in Iran were for drug offences, but political prisoners and ethnic minorities were also among those put to death.

Between 500 and 625 people were executed last year, including 57 in public, he said, echoing concerns by U.N. High Commissioner for Human Rights Navi Pillay.

More than 40 people were executed during the first half of January 2014, Ban said.

“The new government has not changed its approach regarding the application of the death penalty and seems to have followed the practice of previous administrations, which relied heavily on the death penalty to combat crime,” Ban said.

Iran has not allowed any U.N. rights investigators to visit since 2005 despite repeated requests, Ban said.

The U.N. special rapporteur on Iran, Ahmed Shaheed, a former Maldives foreign minister, is to issue his own report in the coming days. The Geneva forum is expected to renew his mandate for a year before its current session ends on March 28.